Culamoya Chimes Songs of the wind

Lola and Frik Haupt believe the wind speaks and their wind chimes respond to it, on their Lidgetton property at the top of a small hill, the sound of musical notes float out over the countryside.
It is not only the chimes that make this scenic spot a charming place to visit, but the garden is bursting with the first spring blooms and the birds sing raucously as the go about their business making nests in the trees. The weaver birds are particularly noisy – chattering and gossiping as they construct their homes.

“The swallows have not arrived yet,” comments Frik looking around the garden, “they are late this year.” Two rooms of their home are devoted to the chimes for which they have become known. Lola, is the saleswoman, and Frik is the more reticent of the duo, preferring to stay in the background and make the chimes.

“Each person has a sound inside their soul” 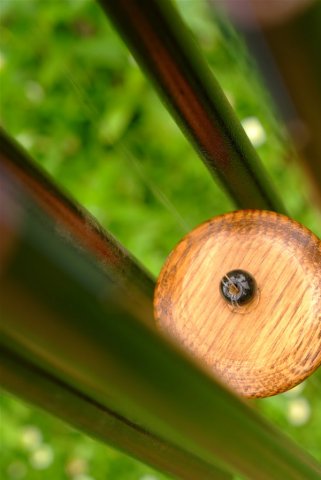 Lola invites guests inside and asks them to be still and to quiet their minds. “Each person has a chime that is meant for them, “ she says sweetly. I am doubtful, but as I wander around tapping the chimes I realize that like music, each chime has certain notes that are more dominant.

Chimes may look generic – an assembly of metal pipes assembled around a knocker. But the sound of the chime is not haphazard and a lot of thought goes into the distinctive noise of a chime. That is why the Culamoya chimes have become a sought after brand.

The Haupt’s were in the real estate business, when Lola felt that the stress of the business was getting too much. She had the strong feeling that they should retire and make chimes. Her husband was incredulous but he knew better than to contradict his determined wife.

Lola had a head for music as a piano player and all her family were musical, her relatives had a hand in creating the old national anthem, the Afrikaans parts are still used. The couple made quite a few experimental chimes, many of which hang in the garden.

But over the years they have created chimes that are soothing and pleasant. Today, twenty four years later, they have over thirty different varieties, ranging from one that sounds like Big Ben to others that sound like the tinkling ripple of a mountain stream.

Lola believes that choosing a chime has a lot to do with one’s inner “musical note” finding its corresponding match. She takes me by the hand and asks me to step closer to a chime, “Close your eyes and listen,” she instructs.

She sets the knocker swinging and in second the notes come cascading one after the other, I also feel a vibration …. A pleasant humming in my head. This chime is called “Gran’s love” 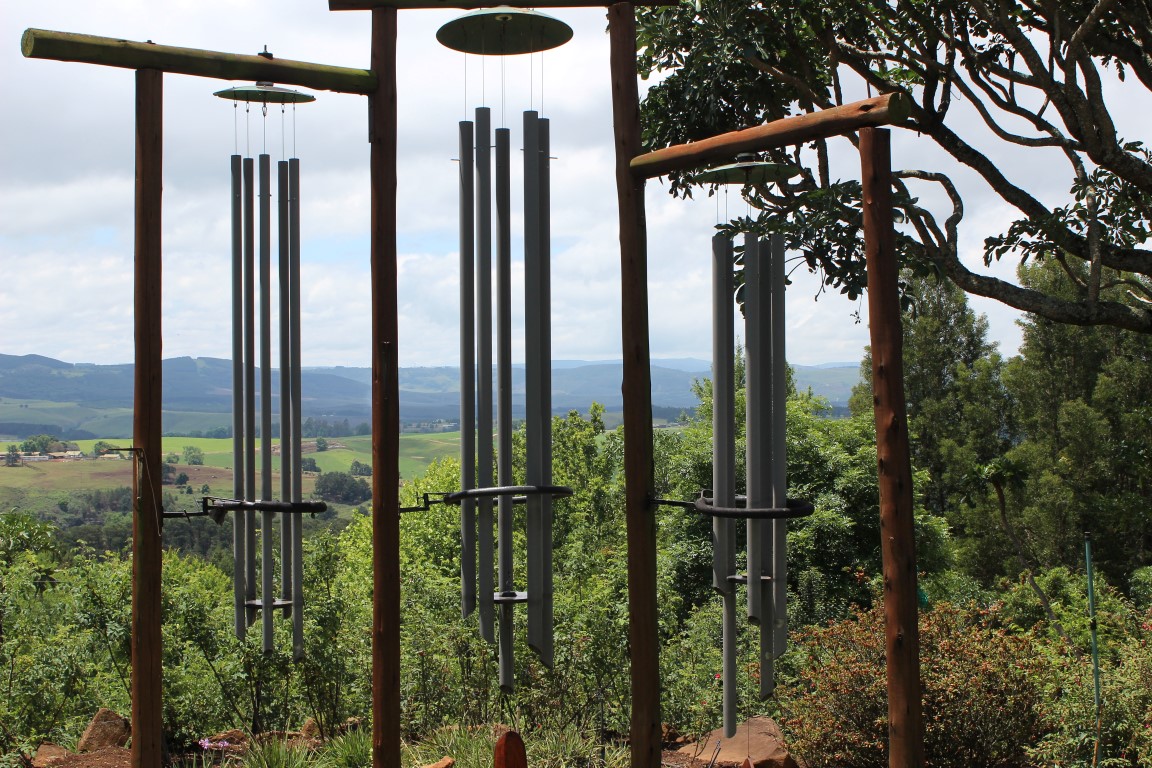 Lola believes that while most people buy chimes for their musical qualities, there are many health benefits to having chimes. She says: “The chimes emit vibrations that are positive. You cannot enter a room where the chimes are tinkling and feel angry for long.”

The Haupts have also created giant chimes that stand up to three metres long , these massive chimes are supported in metal frames at the edge of their property. Named Love, Forgiveness, Giving. The chimes make a spectacle as they sway in the breeze.

These chimes are heavy and are seldom heard unless a strong wind blows them. The vibration and deep harmonious song is riveting. Lola says people come to their property justto sit and absorb the healing atmosphere. The noise of the chimes soothes troubled souls.

These massive chimes are sold to churches and spiritual retreats abroad, as their qualities seem to resonate across all cultures and religions.

Frik Haupt says chimes are a basic combination of engineering and music. “The sound quality depends on three things – the thickness of the pipe, the length of the pipe and the material of the pipe. Other factors affecting the notes are the weight of the knocker and the holes in the pipes.”

In their showroom they have collected chimes from many other cultures, glass chimes from Asia, bone and bead chimes from rural Africa and the earthy bamboo chimes that come from India. 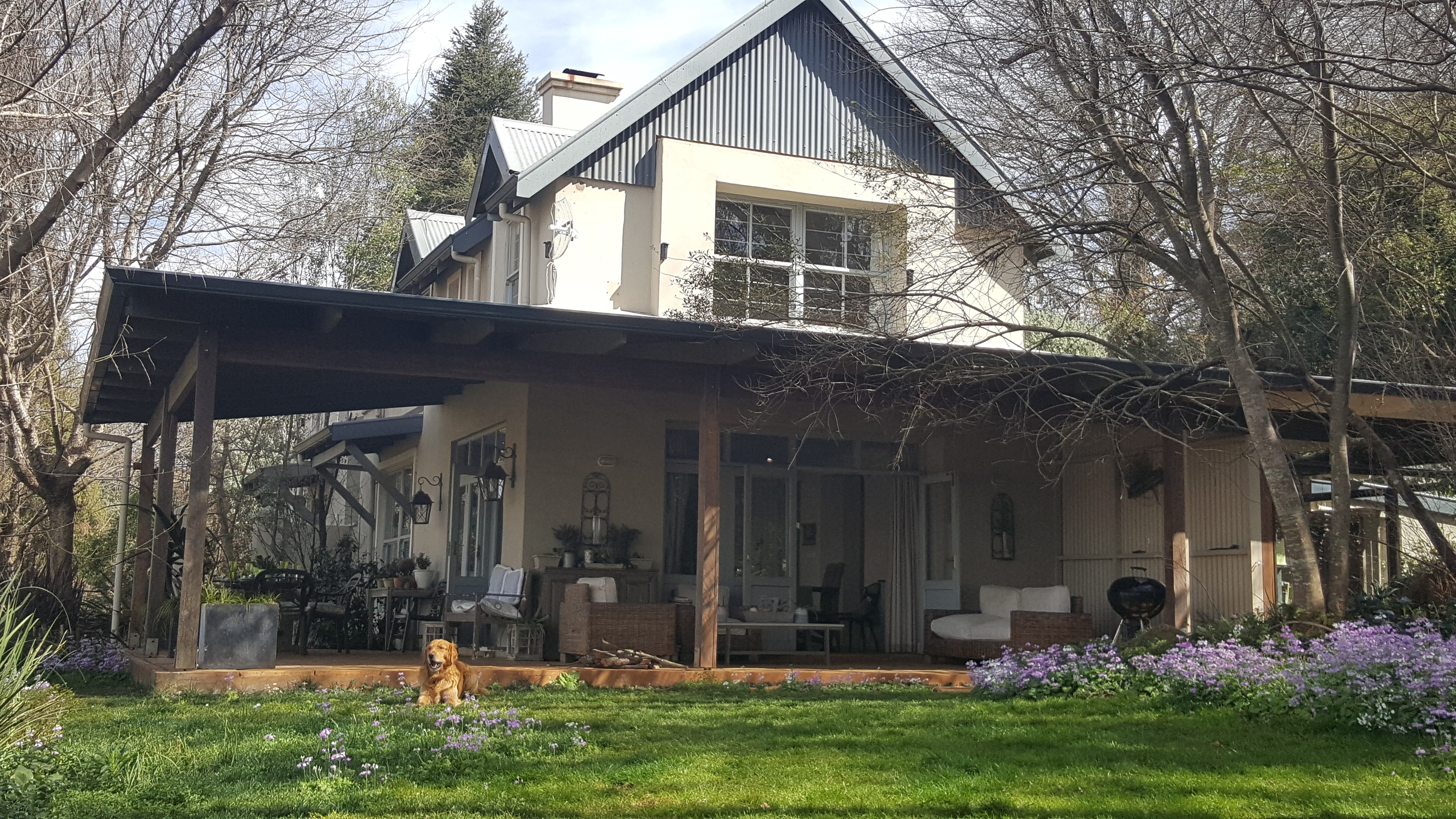 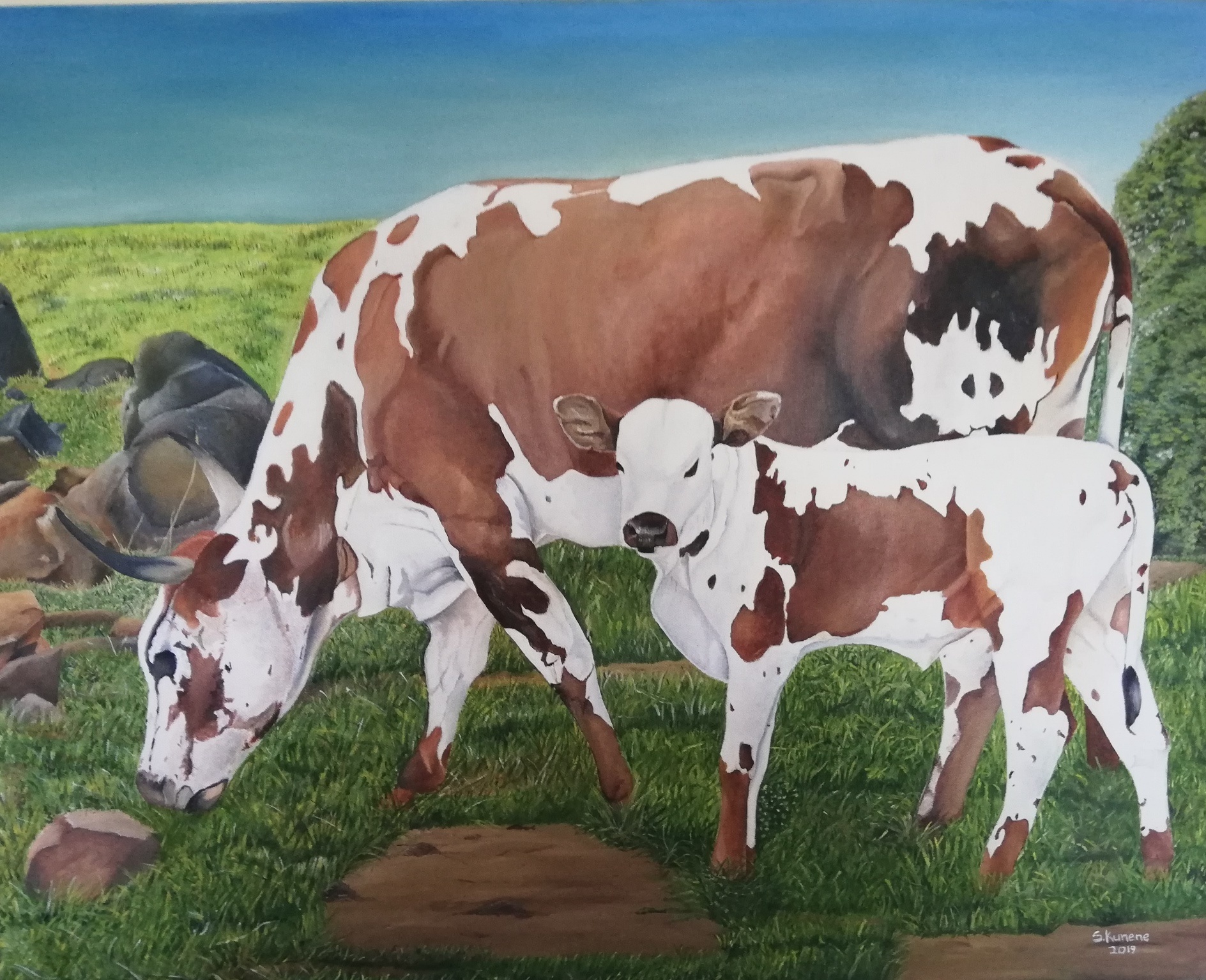 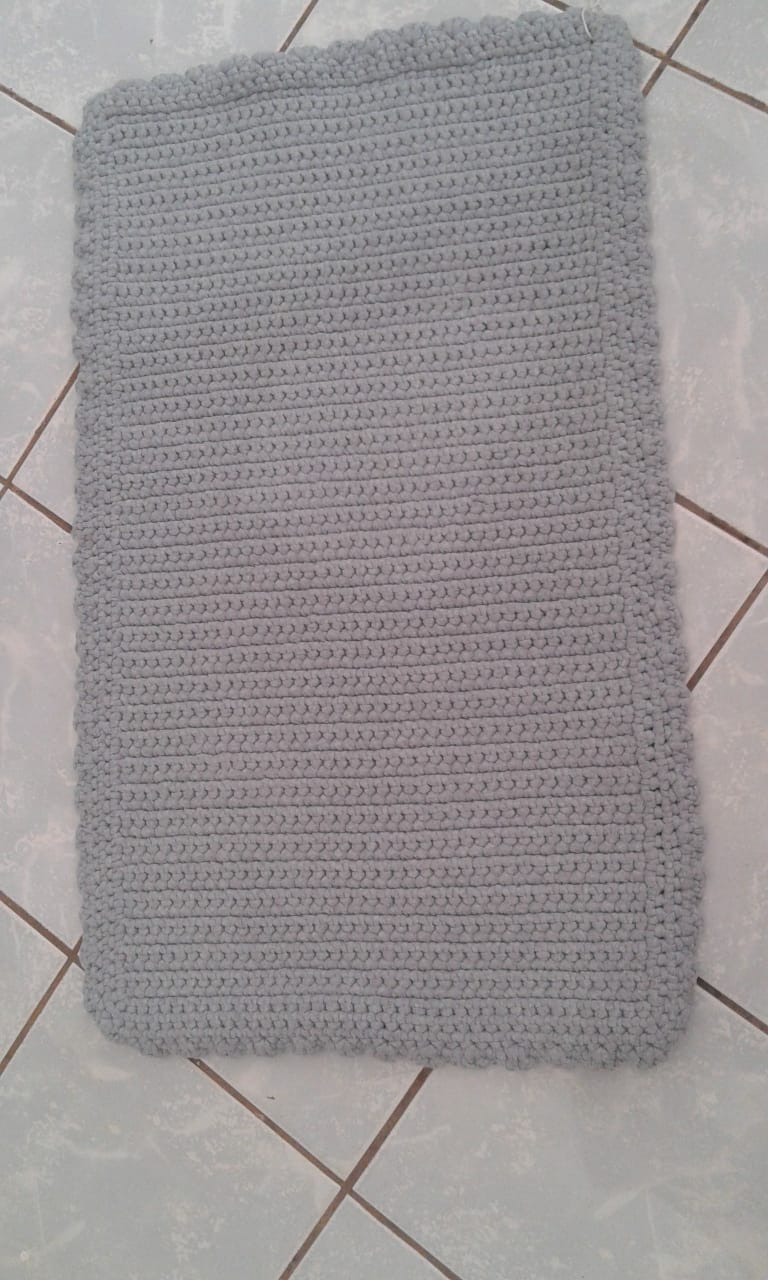 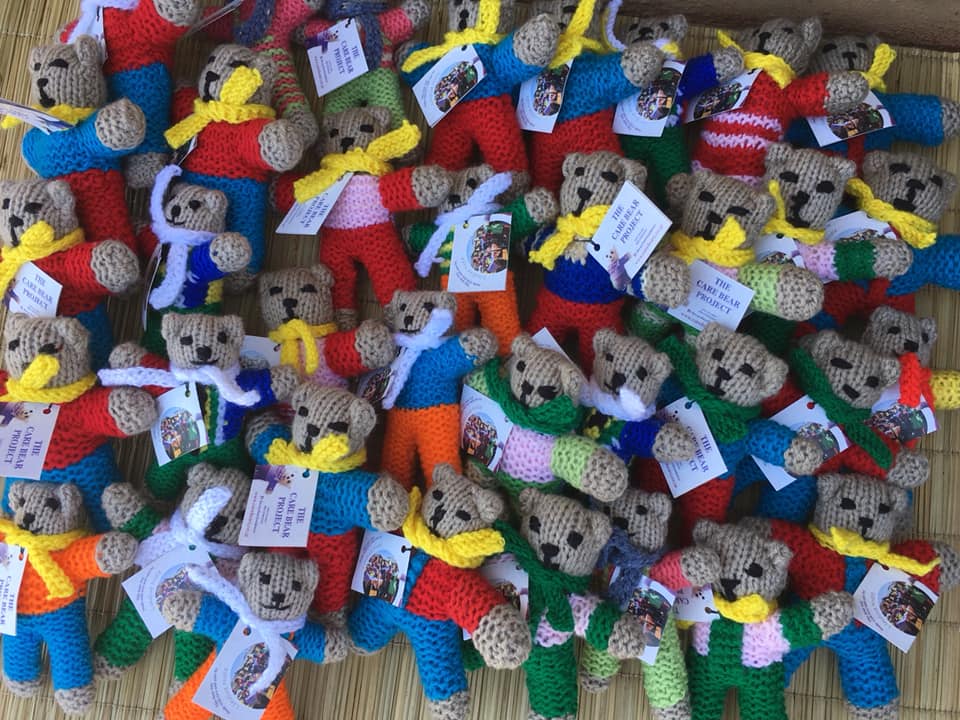 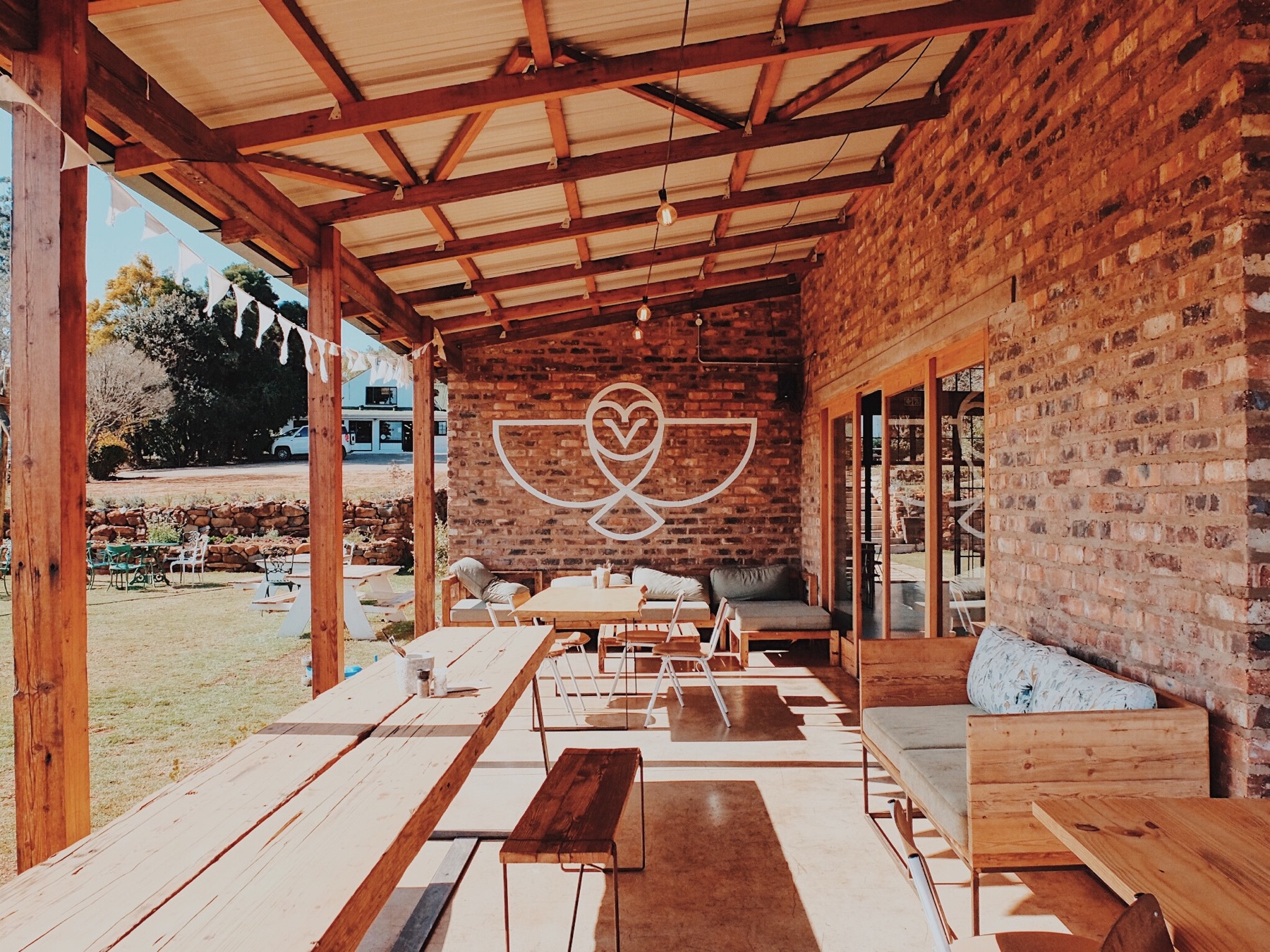 Music In the Hills -(MiTH) 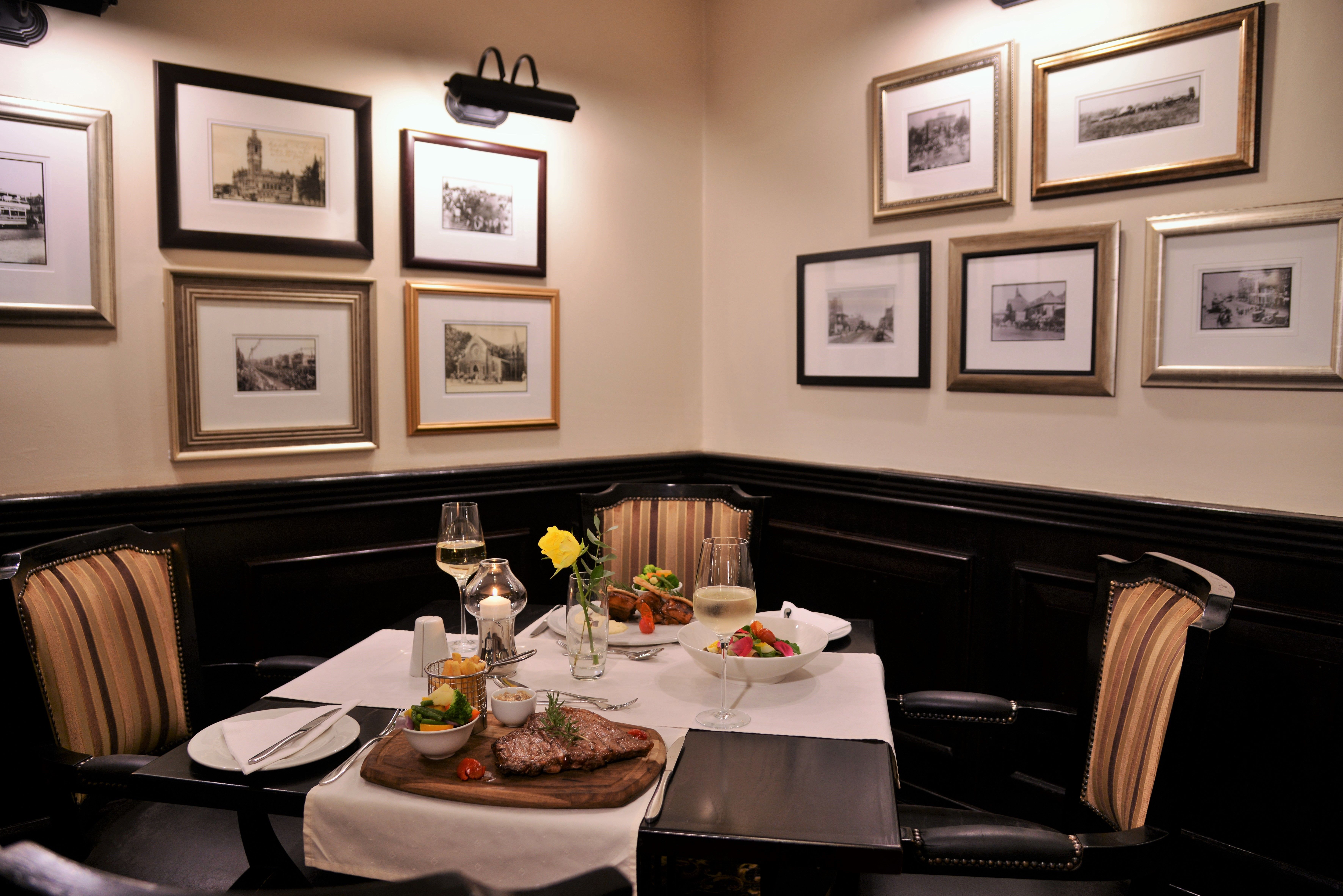 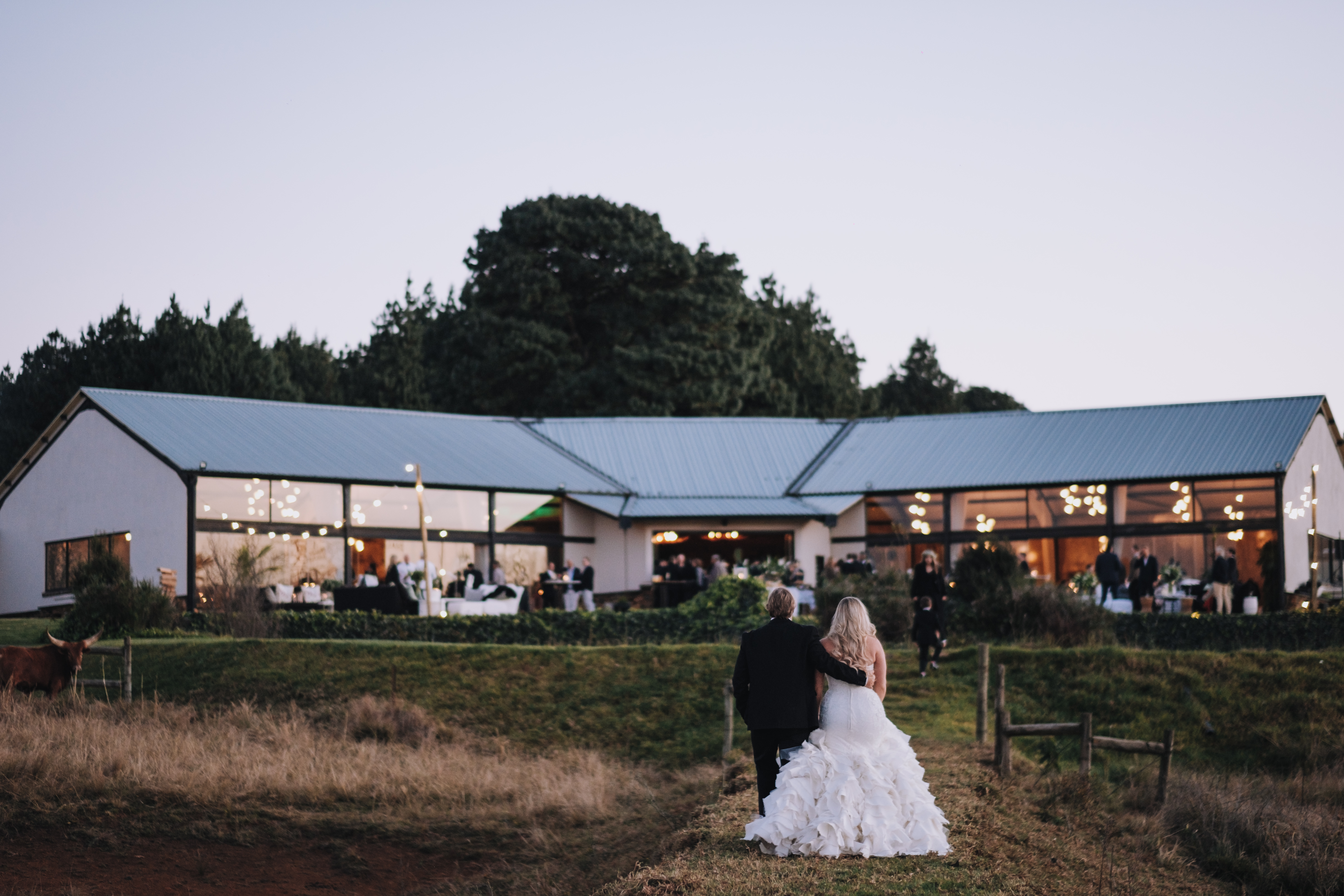 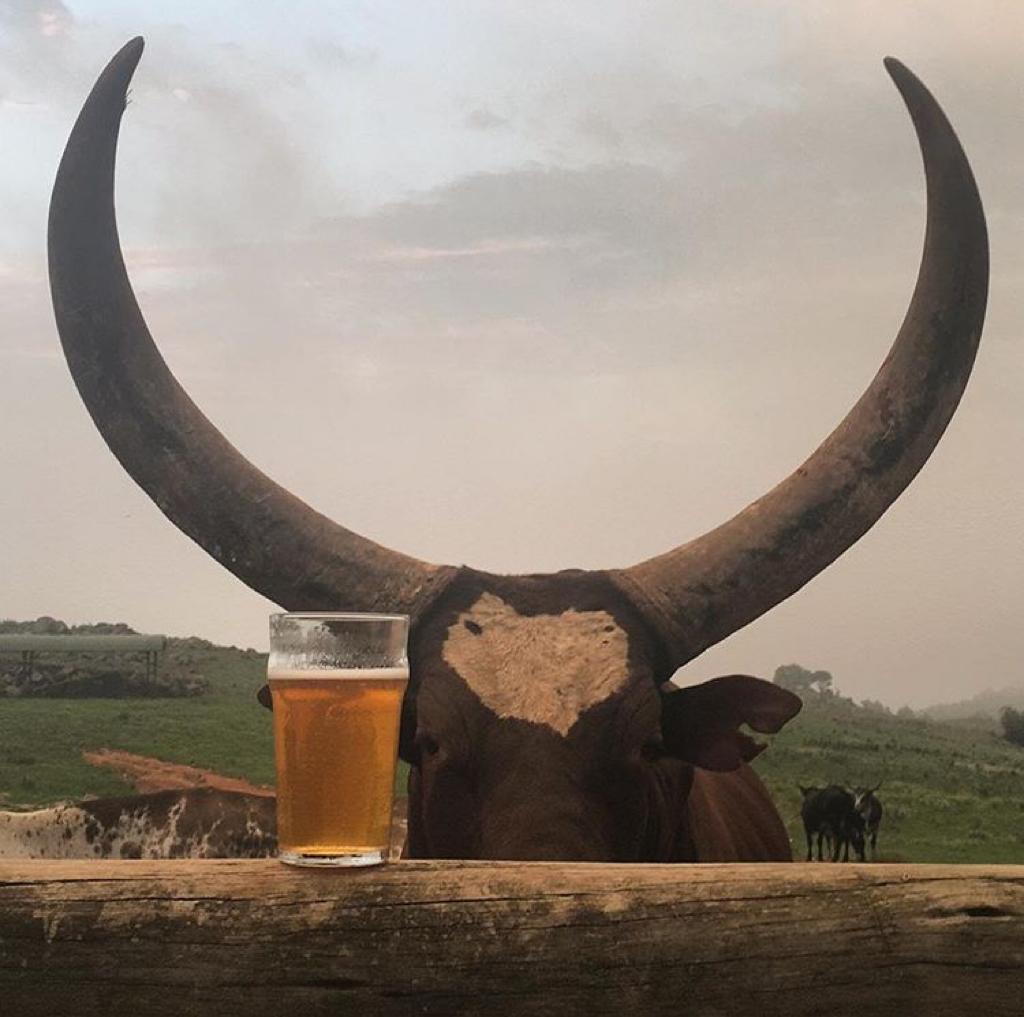 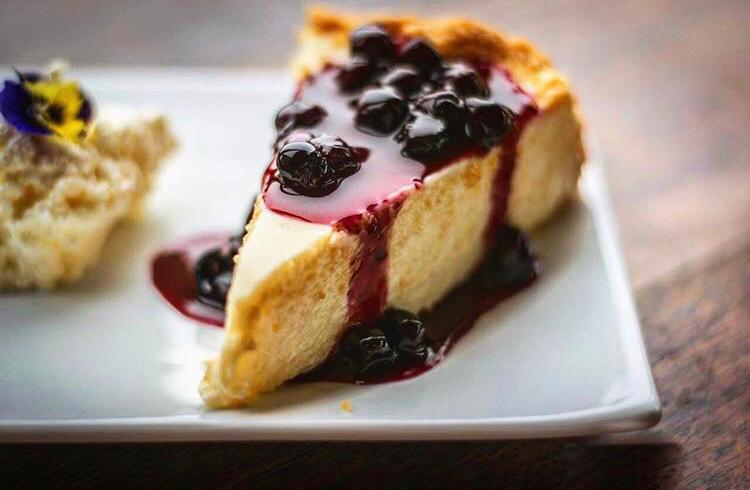 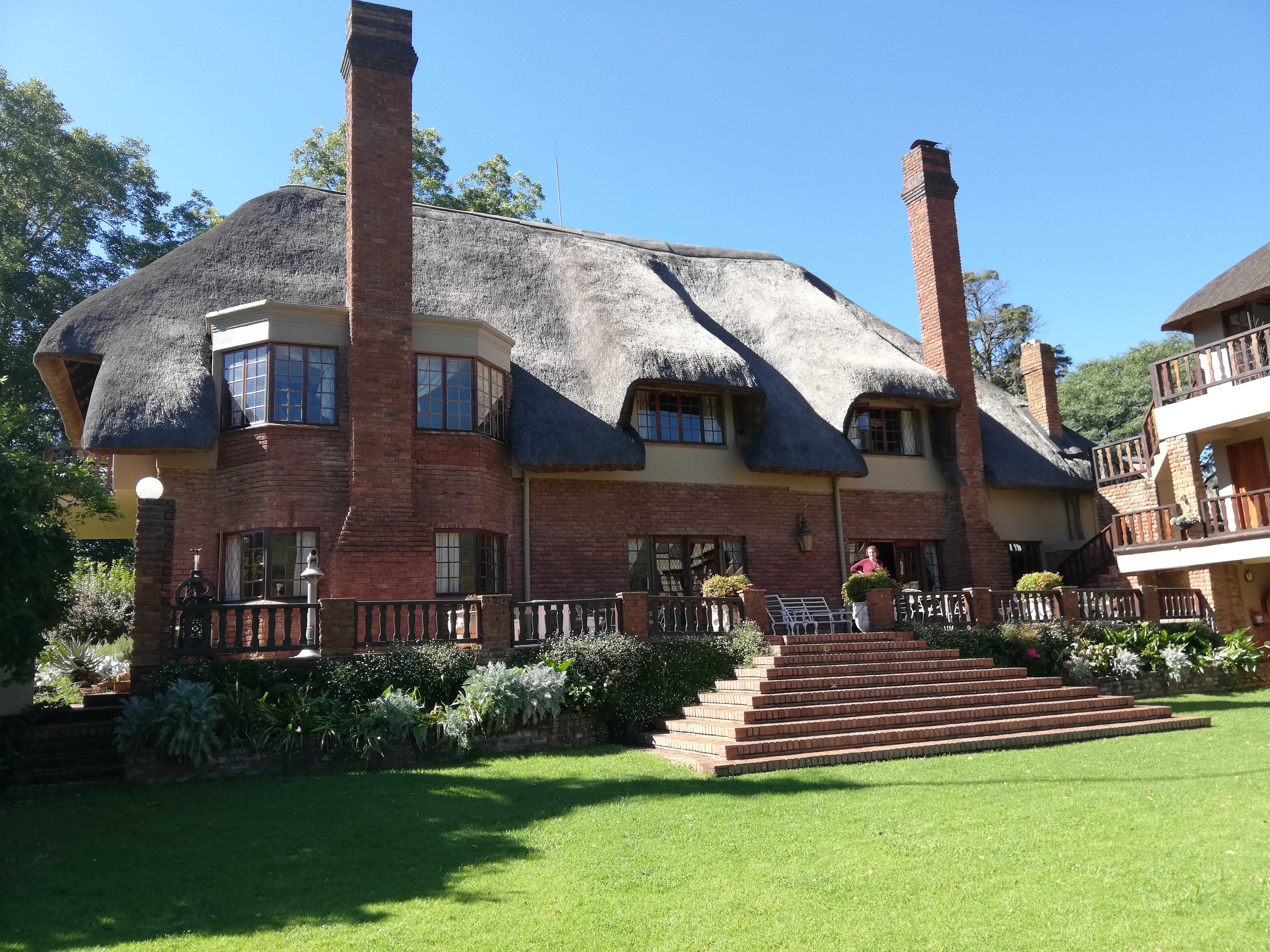 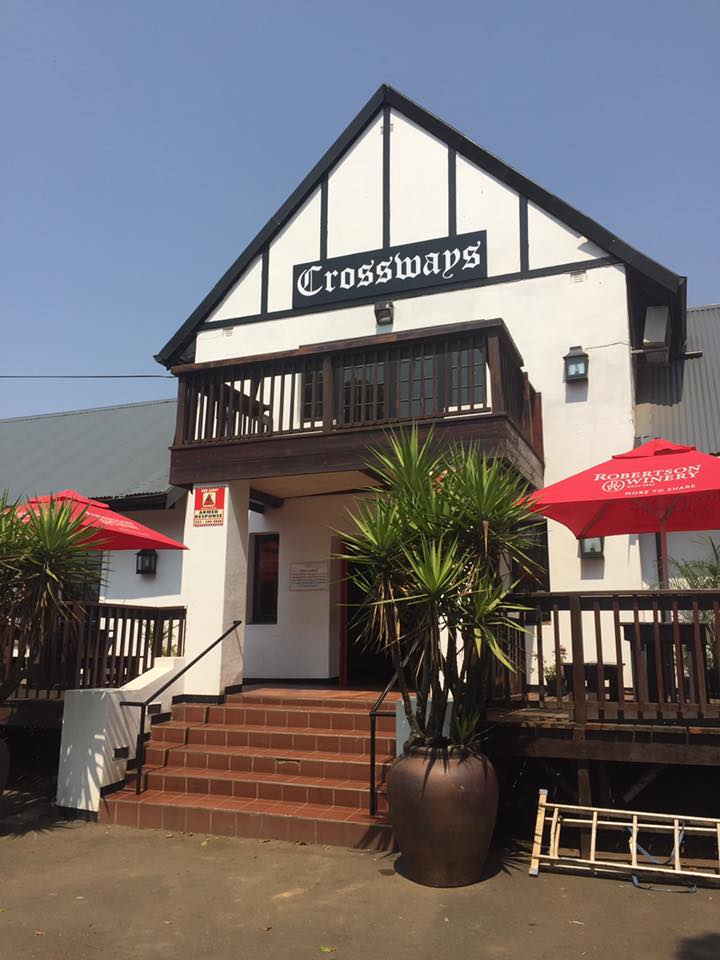